Wow!  It doesn’t get much better…

Last night, at the Chamber Business Awards 2017 hosted by the British Chambers of Commerce we won the national award for Best Use of Technology, and amazingly were then crowned overall national Business of the Year.

As a regional winner of the British Chamber of Commerce’s Best Use of Technology, we attended the very prestigious, black tie awards ceremony at the Brewery in London along with great businesses from all over the UK.

“Sitting at one of the furthest tables from the stage, it was so unexpected that we almost missed the announcement! Everyone at AnyJunk is extremely proud to have been recognised in this way. To be have been chosen from thousands of companies across the UK is a huge honour and one we’ll do our very best to live up to.” 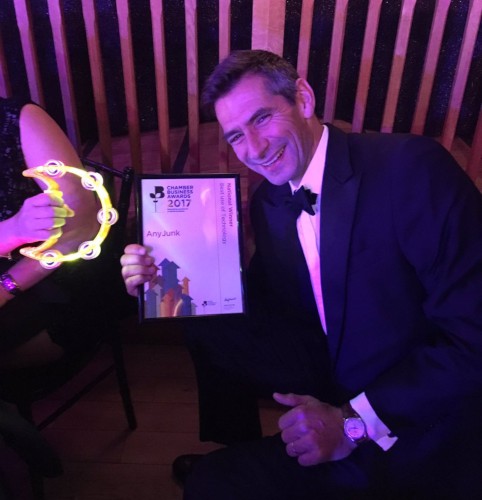 As a prize for winning the Business of the Year Award, Jason gets the chance to work with Rada and join a one-day communication skill and impact course. Hopefully, after that, he’ll be able to come up with some slightly better quotes!

Save me money
No thanks, I’m not in London